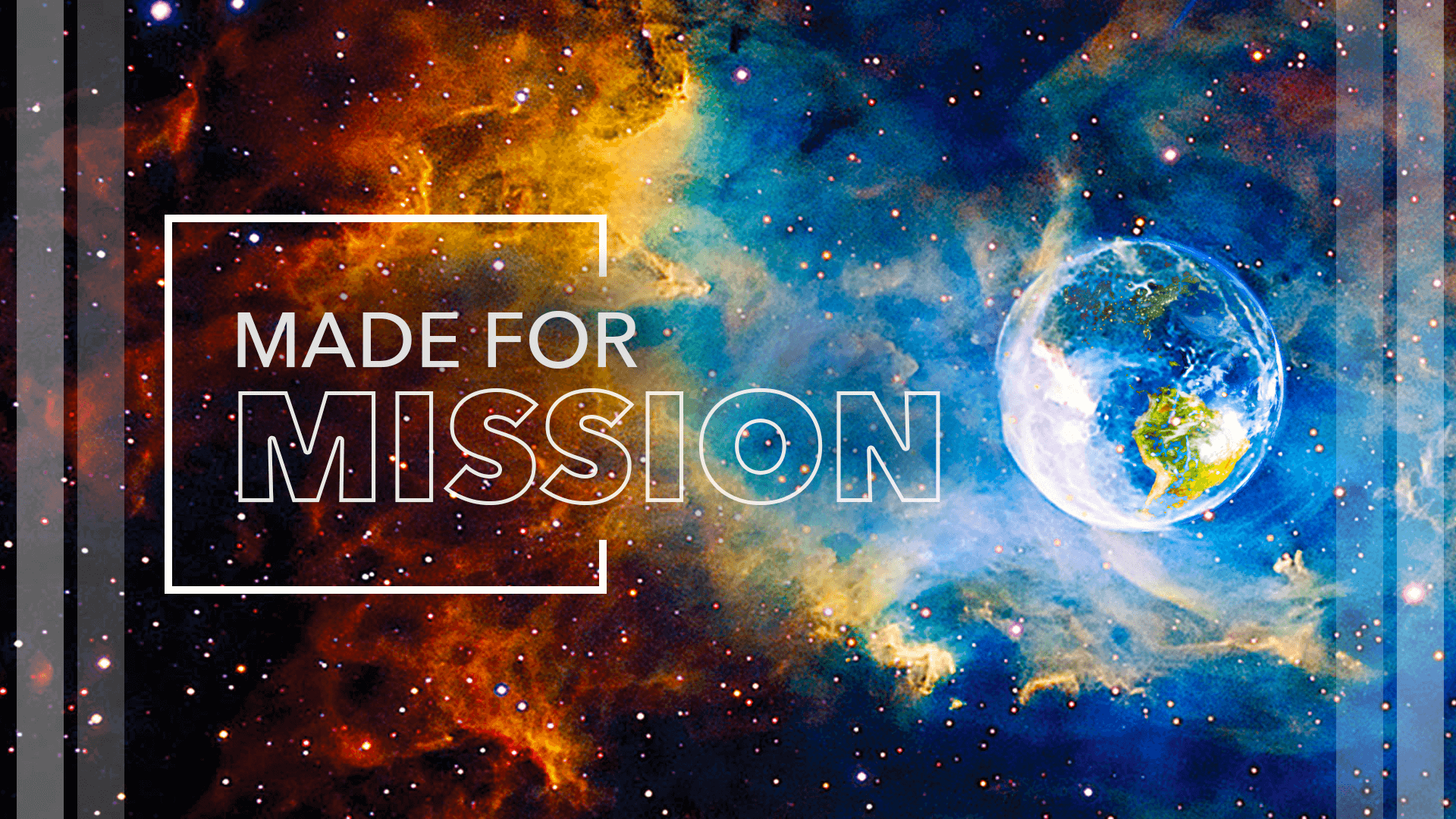 Connect
Give
Raise the Roof Updates

A message from
Pastor Josh Laxton

Jesus Appears to His Disciples

19 On the evening of that first day of the week, when the disciples were together, with the doors locked for fear of the Jewish leaders, Jesus came and stood among them and said, “Peace be with you!” 20 After he said this, he showed them his hands and side. The disciples were overjoyed when they saw the Lord.

21 Again Jesus said, “Peace be with you! As the Father has sent me, I am sending you.” 22 And with that he breathed on them and said, "Receive the Holy Spirit.

Today, we worship God for His greatness. God is greater than any power or person, great in holiness, great in majesty, great in love.

Made For Mission:Jesus and God's Mission

Last week, we looked at the difference it makes to have the right kind of leader to help us carry out our God-given mission. King David, considered a person after God’s own heart, provided an example. Even though David was not perfect, he never worshiped another God. Unlike his son Solomon and the kings that followed him, he never worshiped an idol. We learned that through the line of David, Jesus Christ would be born as the world’s true King, the only One to whom all people should and eventually will show full obedience and allegiance. This week, we’ll see how Jesus called His followers into His mission and what it means to be sent out by Him. We must accept our mission to go into the world with the good news of Jesus.

How to Use This Guide

Thank you for taking the time to do this Bible study. When we dig deeper into God’s word, He promises to bless us. We follow in the footsteps of King David, who wrote in Psalm 119:105: “Your word is a lamp for my feet, a light on my path.

This guide will provide a weekly framework for spiritual conversations with friends or family. We encourage you to reach out to a friend or two, pick a time to get together each week, and work through this guide together. This Bible study can also be a good tool for families, perhaps coordinated with mealtimes.

What does the Bible say?

Now go back and read John 20:30-31 once more, keeping in mind that these verses state John’s purpose for writing his gospel account. Why did John write about what Jesus did, according to John 20:31? There are two references to believing here. How does the second mention build upon the first?

This chapter can be divided into three encounters with Jesus and the belief in Him that followed.

In John 20:1-3, Mary Magdalene finds a surprise when she goes to the tomb where Jesus had been buried. What did she find when she arrived? Who did she go and tell? What conclusion did she draw about what she had seen?

Skip ahead to her actual encounter with Jesus in John 20:11-18. What kind of state was Mary in, according to John 20:11? Another surprise awaited her when she looked into the tomb in verse 12. What did she see? What did the figures say to her (John 20:13)? What was her response? Her answer echoes her original concern in John 20:2. She then turns around and sees someone. Who was this person (John 20:14)? What did He ask her in verse 15? Who did she mistake Jesus for? Her answer conveys her original concern. She believed that someone had taken away Jesus’ body and she wanted to recover it. Why do you think this was so important to her?

John lets us in on how Mary came to believe that Jesus was alive. Do you relate to her process? Many of us think our interpretation of events must be the only option. Mary was convinced that someone had taken away Jesus’ body. She expressed this same concern three times: to Peter and John, the angels in the tomb, and finally to Jesus Himself. But, when Jesus spoke her name, she recognized Him and believed He had risen from the dead. Then she showed she believed by obeying Jesus and doing what He asked her to do.

Mary’s encounter happened in the early dawn. John 20:19 marks the time of this next encounter in the evening of the same day. Who was gathered there (John 20:19, 24)? What kind of emotional condition were they in? Do you think they had believed Mary’s report about Jesus in John 20:18? When Jesus arrived, what did He say (verses 19-20)? What did He do in verse 20? How did the disciples respond?

The disciples who had gathered did not yet believe before Jesus appeared in the room. How do we know this? Behind locked doors and in fear of the Jewish religious leaders, suddenly the group encountered Jesus standing in their midst. What did He say to them (John 20:19)? How did Jesus then prove who He was (verse 20)? What was the reaction from His disciples?

What did Jesus say next (John 20:21)? In our English translations, Jesus states that as the Father has sent Me, I am sending you.” In the Greek, sent/sending are two different words, yet synonyms. The idea of sending and being sent is a favorite theme in John’s gospel. He uses both Greek words more than any other writer in the New Testament. In his gospel alone, these two words combined occur 58 times. We do not know why Jesus used apostellō to refer to how His Father had sent Him and pempō when He stated that He was now sending His disciples out. Perhaps Jesus used a different word in order to assuage His followers’ fears. If Jesus had used the same word to say “As the Father has sent me, I am sending you,” perhaps the disciples would assume they should also expect to be tried before the Jewish leaders, condemned by the Roman government, and hung on a cross. The group was fearful of this very thing, having already huddled together and locked the door. When Jesus used a different word for sending them, they could know that Jesus had something different in store for them. Even though most of them would eventually suffer for their belief in Jesus, there was much work to be done beforehand. This is because the Holy Spirit was coming.

What did Jesus do next in John 20:23? Jesus action and His words that signified authority in verses 23-24 would open up a new era for His followers. You can read what happened as a result of the Holy Spirit’s coming in the book of Acts.

How did Thomas find out what had happened in John 20:25? What was Thomas’ reaction to the report given by the ones who had seen Jesus alive?  Thomas does something the others didn’t do. He states that he will not believe unless some conditions are made. What are they?

What was the situation a week later in John 20:30 and who was there now? Why do you think they locked the doors again? When Jesus appeared, what did He say (John 20:26)? Jesus then got right to the point with Thomas. What did He encourage Thomas to do in verse 27? What was Thomas’ reaction in verse 28? Why do you think Thomas believed at this point?

In all of these incidents, Jesus’ followers were overjoyed when they “saw” the Lord. After doing so, they believed in Him. But, what does Jesus say to Thomas in John 20:29? In this verse, Jesus could be talking about you and me. We have not seen Jesus in person like the people in this chapter did, and yet we believe in Him.

God is on mission to redeem a people from all peoples who will reflect His glory in all spheres of life. God’s mission shapes the world. The Bible describes and confirms this mission from beginning to end. Woven into the creation of Adam and Eve, the mission extended to all nations through God’s promise to Abraham. It was embodied in a covenant people called Israel who were to be a light to other nations. Upon His arrival, Jesus took up this same mission and taught it to His disciples.

God is on mission to redeem a people from all peoples who will reflect His glory in all spheres of life.

God’s mission shapes the world. The Bible describes and confirms this mission from beginning to end.

Woven into the creation of Adam and Eve, the mission extended to all nations through God’s promise to Abraham. It was embodied in a covenant people called Israel who were to be a light to other nations. Upon His arrival, Jesus took up this same mission and taught it to His disciples. Equipped by the Spirit of God, the disciples were to go into all the world and make more disciples. Today, those who follow Christ take on His mission to redeem a people from all peoples. We were designed to reflect His glory in every sphere of life, not only in this present life but in the life which is to come. In heaven, we will see the culmination of God’s mission and join with a multitude of worshipers from every tribe, nation, and tongue who gather before God’s throne .Until then, will you give your life to God? Will you join in His mission?

New to Northland? Need prayer? Looking for community?
LET US KNOW >
Have questions about God or faith? Did you recently accept Christ? Do you want to know more about what it means to be a disciple of Jesus? Wherever you are on your faith journey, we want to come alongside you.
WE CAN HELP >

Help us serve schools in our community by supporting our Food Drive!

Food items for the schools include:

If you have never been baptized before this is your chance to take this step of obedience in Christ!

"He Gets Us" Training

“He Gets Us” is a national campaign designed to create cultural change in the way people think about Jesus and his relevance in our lives.

If you'd like to learn more or have questions related to finances at Northland, contact our finance team at FinanceTeam@NorthlandChurch.net.
GIVE NOW

If you'd like to learn more or have questions related to finances at Northland, contact our finance team at FinanceTeam@NorthlandChurch.net.
GIVE NOW >
X