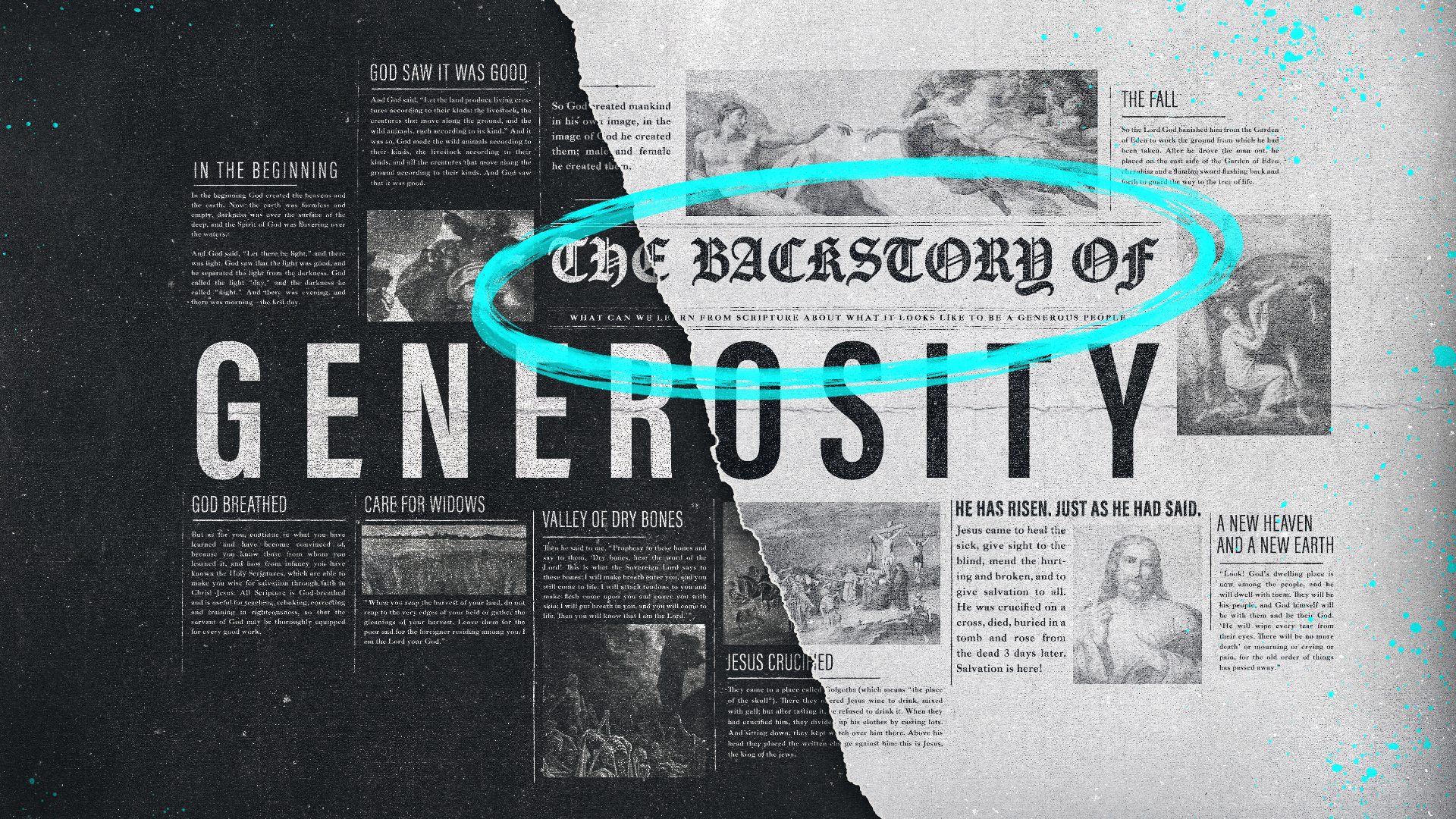 Connect
Give
Sanctity of Life Month

The Practices and Pattern of Generosity

A message from
Pastor Josh Laxton

1 In the beginning God created the heavens and the earth. 2 Now the earth was formless and empty, darkness was over the surface of the deep, and the Spirit of God was hovering over the waters.

20 And God said, “Let the water teem with living creatures, and let birds fly above the earth across the vault of the sky.” 21 So God created the great creatures of the sea and every living thing with which the water teems and that moves about in it, according to their kinds, and every winged bird according to its kind. And God saw that it was good. 22 God blessed them and said, "Be fruitful and increase in number and fill the water in the seas, and let the birds increase on the earth." 23 And there was evening, and there was morning—the fifth day.

26 Then God said, “Let us make mankind in our image, in our likeness, so that they may rule over the fish in the sea and the birds in the sky, over the livestock and all the wild animals, and over all the creatures that move along the ground."

28 God blessed them and said to them, “Be fruitful and increase in number; fill the earth and subdue it. Rule over the fish in the sea and the birds in the sky and over every living creature that moves on the ground.”

29 Then God said, “I give you every seed-bearing plant on the face of the whole earth and every tree that has fruit with seed in it. They will be yours for food. 30 And to all the beasts of the earth and all the birds in the sky and all the creatures that move along the ground—everything that has the breath of life in it—I give it every green plant for food." And it was so.

31 God saw all that he had made, and it was very good. And there was evening, and there was morning—the sixth day.

1 Thus the heavens and the earth were completed in all their vast array.

4 This is the account of the heavens and the earth when they were created, when the Lord God made the earth and the heavens.

8 Now the Lord God had planted a garden in the east, in Eden; and there he put the man he had formed. 9 The Lord God made all kinds of trees grow out of the ground—trees that were pleasing to the eye and good for food. In the middle of the garden were the tree of live and the tree of knowledge of good and evil.

10 A river watering the garden flowed from Eden; from there it was separated into four headwaters. 11 The name of the first is Pishon; it winds through the entire land of Havilah, where there is gold. 12 (The gold of land is good; aromatic resin and onyx is also there.) 13 The name of the second river is Gihon; it winds through the entire land of Cush. 14 The name of the third river is the Tigris; it runs along the east side of Ashur. And the fourth river is the Euphrates.‍15 The Lord God took the man and put him in the Garden of Eden to work it and take care of it. 16 And the Lord God commanded the man, "You are free to eat from any tree from the garden; 17 but you must not eat from the tree of the knowledge of good and and evil, for when you eat from it you will certainly die." 18 The Lord God said, “It is not good for the man to be alone. I will make a helper suitable for him.”

But for Adam no suitable helper was found. 21 So the Lord God caused the man to fall into a deep sleep; and while he was sleeping, he took one of the man's ribs and then closed up the place with flesh. 22 Then the Lord God made a woman from the rib he had taken out of the man, and he brought her to the man. 23 The man said,

“This is now bone of my bones
and flesh of my flesh;
she shall be called ‘woman,’
for she was taken out of man.”

24 That is why a man leaves his father and mother and is united to his wife, and they become one flesh.

25 Adam and his wife were both naked, and they felt no shame.

Today, we worship God for His generous welcome. Jesus welcomed and ate with sinners, ones not unlike you and me. His welcome opens the way for the good news of salvation to come to all who will hear it.

Leveraging Your Time, Talents, and Treasures

“Treasures are things we possess—materials, resources, and finances—that we give to meet and exceed the [holistic] needs of others.”

God challenges each of us to be generous with our time, talents and treasures.

From the beginning in Genesis 1 and 2, God shows us how He brought about the flourishing of creation as He took the time to create the heavens and the earth.  Also, in these first two chapters in the Bible, God uses his master talents as He spends time thinking about His purpose, plan and priorities as he brings creation into existence from nothing. God also shares His treasures as he met the needs of Adam and Eve in Genesis so that they could become everything that God created them to be.

God continues, throughout the Bible, to be generous with His time, talents and treasures.   By studying the Bible, we come to understand God’s generosity so that we then can take steps to be a generous people.   For example Psalm 36:5-8 states, “Your love, LORD, reaches to the heavens, your faithfulness to the skies …. People take refuge in the shadow of your wings. They feast on the abundance of your house; you give them drink from your river of delights.”  Can you name some additional examples of God’s generosity in the Bible?

As we continue to think about generosity, we need to consider that we don’t necessarily need material wealth to be generous.  As we think, plan, and reflect on generosity with an open and willing heart, we can come up with creative ways to be generous with our time, talent and resources.   For example:   Could we serve our family by doing a chore that no one else cares to do?  Can we encourage a stranger who appears to need a boost with a kind word?  Might we tell someone we love them and why we love them?  Can we be fully present and not be looking at our phones or thinking about the next thing we need to do when we interact with people?

Our God is a generous God.  Just as with Adam and Eve, He exceeds our needs by giving us more than enough.   As we leverage our time, talents and treasures to bless others, we reflect God in all His glory as we work toward the flourishing of the people and things that we love.

WHAT NOT TO MISS

Key learning points from the sermon:

The Backstory of Generosity

a history or background, especially one created for a fictional character in a motion picture or television program. - Google’s English dictionary

What if we told you that the backstory of generosity isn’t fictional? It’s real and the characters at its forefront lived in real-time. You think you already know what you need to know about generosity? Think again.

The Backstory of Generosity

a history or background, especially one created for a fictional character in a motion picture or television program. - Google’s English dictionary

What if we told you that the backstory of generosity isn’t fictional? It’s real and the characters at its forefront lived in real-time. You think you already know what you need to know about generosity? Think again.

In our new 4-week series The Backstory of Generosity, you’ll learn about the biblical birthplace of generosity (spoiler alert: it’s in Genesis!). Find out about its great purpose to bring heaven on earth. Take in how you can live generously via real-life practices and patterns. Finally, discover how you can develop a passion for generosity. Remember, generosity isn’t a behavior, if you are a child of God, generosity is a part of your very being.

New to Northland? Need prayer? Looking for community?
LET US KNOW >
Have questions about God or faith? Did you recently accept Christ? Do you want to know more about what it means to be a disciple of Jesus? Wherever you are on your faith journey, we want to come alongside you.
WE CAN HELP >

Come deck the halls at Northland to help us prepare for the Christmas season. Wear your festive Christmas apparel and enjoy hot chocolate and snacks. We will be setting up Christmas Trees in the foyer, making decorations for our children’s areas, setting up garland, and many more projects around the building. Children of all ages are welcome! There will be stations set up for kids to make ornaments for our Early Childhood area!

Join us on November 29 where we will be raising money for our Lifehope Childcare, who has been providing free childcare in our community since 2015.

Pastor Josh has introduced the phrase “towel holder” into our vocabulary. To be a towel holder simply means to serve the way Jesus did.Join us as we celebrate all the towel holders who have served this year! Come for a yummy breakfast, fun festivities, and prizes! We’ll gather together to recognize our faithful towel holders and look forward to the future that 2023 holds!

If you'd like to learn more or have questions related to finances at Northland, contact our finance team at FinanceTeam@NorthlandChurch.net.
GIVE NOW

If you'd like to learn more or have questions related to finances at Northland, contact our finance team at FinanceTeam@NorthlandChurch.net.
GIVE NOW >
X